With his new album, Overnight Sensation, climbing the contemporary jazz radio charts, it makes you wonder if soul-jazz trumpeter Joey Sommerville had a hunch when he came up with the title. Either way, he hit the nail right on the head with this soulful, funky excursion into the party-side of contemporary and straight-ahead jazz, sprinkled with R&B, hip hop and rock. Released October 28, 2014 on Joey’s own imprint, Jayvox, Overnight Sensation ispoised for a meteoric rise to the top. 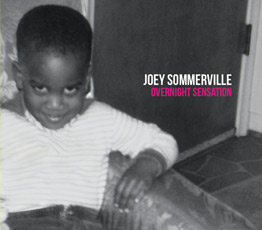 “In this era of singles downloads, I still believe in the concept of albums and a cohesive body of music,” said the Atlanta-based Sommerville, who wrote or co-wrote nine of the disc’s ten tracks and produced the entire session sharing production duties on two cuts with fusion icon Jeff Lorber. The concept of Joey’s fifth album was carefully crafted over the course of two decades. “I’ve always wanted to record these songs and I really like them, but they didn’t fit on previous projects. They were all inspired by real life experiences thus they have meaning. The long journey that is a music career is a marathon, not a sprint, and the timing finally came around for these songs to be recorded for the first time. Surprisingly, they fit together despite being written over a long period of time and the variety in their sound and style.”

Joey Sommerville is definitely no stranger to the music career marathon. He has performed and recorded with a wide range of artists including mega-rock group Phish. He was the featured instrumental soloist on the Cirque de Soleil’s Grammy-nominated and Juno Award winning album, Alegria. In 2001, he scored a Gavin Top 20 Contemporary Jazz hit as a writer/producer with Bob Baldwin for the single “Business Call”. In 2006, Joey took his turn as a featured soloist on Hidden Beach Recording’s “Unwrapped Volume 4”. He produced bassist/vocalist Rhonda Smith’s “RS2” which features Prince, Sheila E. and gospel great, Fred Hammond. The album made the 2007 Grammy Ballot and was voted one of the 10 best albums of the year by Music Magazine (Japan).

For your listening pleasure: