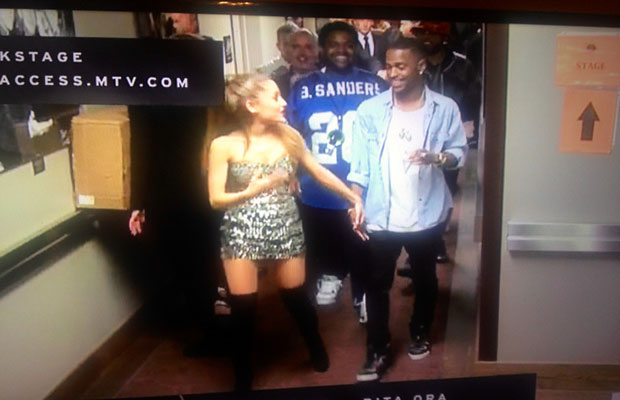 So what exactly is the deal between these two? Earlier this month, sources told eonline  that the pair that worked on Grande’s hit “Problem” are dating.

“They have been friends since they made the song together. They have been spending more time together and recently have been getting very close. They are both doing great,” said the source to eonline. Neither of the two had responded to the rumors.

Now lets fast forward to the night of the MTV VMAs that took place on Sunday August 24 at The Forum in Inglewood, California.  Cameras caught the two backstage holding hands after the 21 year old singer had tripped and the rapper quickly helped her up. Can we all say things that make you go Hmmm…?

Big Sean had been engaged to Glee star Naya Rivera but decided to call off the wedding in April. Three months later, Rivera did the unthinkable and married actor Ryan Dorsey at a secret ceremony in Mexico.

Lets all see if Big Sean really has something a bit more Grande on his mind these days.