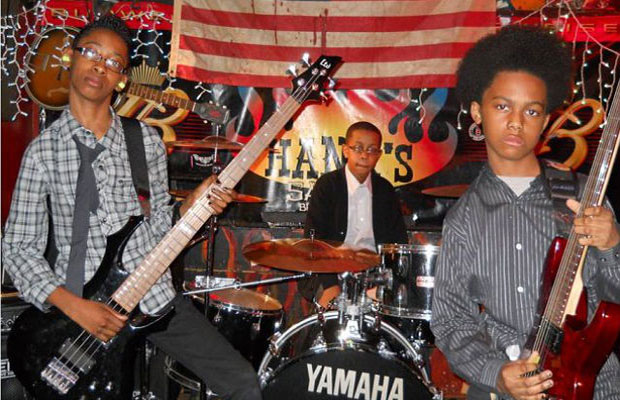 (L-R) Alec Atkins, Jarad Dawkins and Malcolm Brickhouse of Unlocking the Truth.
Brooklyn metal trio comprised of 12-and-13-year-olds who according to The New York Post, just inked a $1.8 million record deal with Sony.
The group plans on hitting  the studio as soon as  they are off the Warped Tour. Metallica has already reached out to the group to get them booked on the Heavy MTL festival [in August].”
The band’s first national exposure came last summer, after a video of the trio performing on a Times Square street corner went viral – racking up 1.5 million views. The clip found its way to a Sony executive and the rest was history.

Since the band consists of all minors (12-year-old drummer Jarad Dawkins, 13-year-old guitarist Malcolm Brickhouse, 13-year old bassist Alec Atkins), the contract was submitted for approval to a Manhattan judge. The five-album deal includes 16-to-17 percent royalties and a $60,000 advance, but the rest of their metal-earned cash will only arrive if their first LP sells more than 250,000 copies – a daunting task in the age of declining record sales.
The group plans on releasing a studio version of “Monster” this summer before their debut album is released this fall. The groups producer has not yet been revealed but notes that it’s a “major guy in the genre.” An upcoming book and full-length documentary is also in the works.